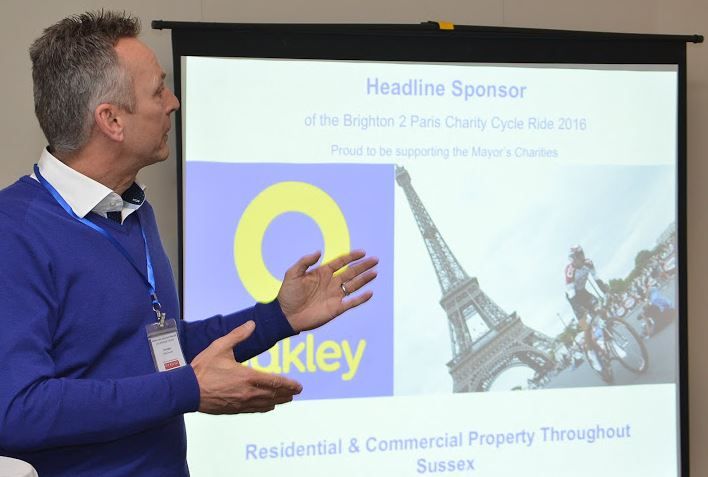 The Brighton & Hove Property Consortium, supported by The Hyde Group and Colin Brace Properties, is organising the first annual cycling event in aid of the Mayor’s Charities.

The Brighton 2 Paris Mayor’s Charity Cycle Ride 2016 will be leaving from the Brighton i360 on Friday 6th May and will arrive at the Eiffel Tower in Paris on Sunday 8th May, to be followed by a reception at the British Embassy.

The Mayor of Brighton and Hove, Cllr Lynda Hyde, said “House building and the property industry already does so much for the city’s economy, however, it is fantastic to see the property industry in the city focusing its efforts to raise substantial funding for three very worthwhile charities”. The Mayor actively supports the Martlets Hospice, Argus Appeal and Grace Eyre, all registered charities reliant on fundraising to serve the local community and improving  the lives of many local people.

Colin Brace, Director of a local private landlord and property development company, said “The event is hoping to raise up to £100,000 for these fantastic charities, which do so much amazing work within the city.  The aim of the Brighton & Hove Property Consortium is to promote the benefits of house building and the property sector within the city. This industry can sometimes get a very rough ride and therefore, this is an opportunity for the house building and local property industry to give something back to the city by supporting these three worthwhile causes. The Mayor hopes to make this an annual event, creating a valuable legacy for the Mayor’s Charities. We have a collective of property professionals who are keen to cycle that extra mile to support the city’s key charities”

For each new home built within the city, around 4.5 full time jobs are supported. Many local companies, jobs and apprenticeships are reliant on the house building industry and this is a big driver for the city’s economy.  This together with new council tax revenues, new homes bonus and financial contributions from developers to build new community infrastructure brings a significant benefit to the city at a time of dwindling government funding.

Tom Shaw, Development Director (South) for The Hyde Group commented “As one of the largest house builders in the Greater Brighton City Region, Hyde is delighted to be able to support fundraising for the Mayor’s Charities. Hyde’s development programme is calculated to make a £2.2billion contribution to the UK economy over the next 5 years. A significant proportion of this investment will benefit the Greater Brighton City Region’s economy, providing new homes and jobs. I look forward to cycling to support an initiative which will benefit three very worthwhile local charities which together put so much effort into supporting local people.”

Joining the peloton en route will be local TV station LatestTV, who will be filming live footage of the cycle ride and creating a short film documentary to publicise the event for subsequent years.

The route via ferry from Newhaven to Dieppe will then pass through beautiful French countryside on to the bright lights of Paris. The ride will be stopping off overnight in Dieppe and Beauvais to recharge tired legs before arriving at the Eiffel Tower on Sunday 9th May. At the end of each day all cyclists will have the opportunity to attend an informal networking supper.

We are looking for extra participants and organisations to become involved.  If you can commit to raising money for these three very worthwhile charities then this event will raise the profile of your organisation’s commitment to corporate social responsibility and provide you with an opportunity to network with fellow property professionals.

Antonia Shepherd, Events Manager for the Martlets Hospice, said “We are absolutely delighted that Colin and so many of his friends and colleagues from the Brighton & Hove Property Consortium and across the property industry are showing their support to the Mayor’s Charities by joining this fabulous fundraising cycle ride.  At Martlets Hospice we rely on the local community to help us to raise the money that we need to look after our patients and their families.  We are hugely grateful to everyone that is raising money on our behalf and would like to wish the team a very successful trip and good luck with their fundraising.”

Please get in touch with us at info@brighton2paris.com if you would like to take part in or sponsor the event