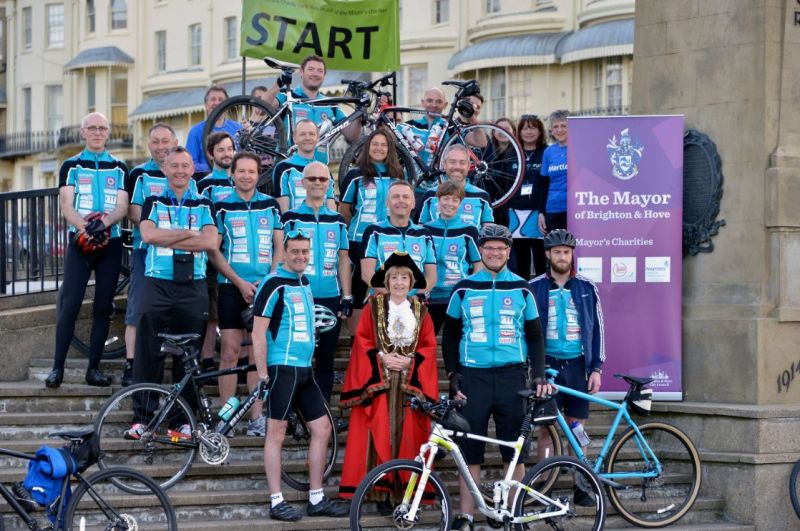 Oakley were proud to be the main sponsors for the Brighton & Hove Property Consortium Brighton i360 to the Paris Eiffel Tower sponsored bike ride.  The company made a major contribution to the fundraising which is now approaching the level of £30,000.

Chris Oakley of Oakley took part in the bike ride, which involved 20 sponsored riders leaving the Brighton i360 on the morning of 6th May, being waved off by the Mayor of Brighton. En route to Paris, the team made their way to Dieppe, via the ferry and were greeted by a police escort which took them to their hotel, courtesy of the Mayor of Dieppe. The team were later that day received by the Deputy Mayor of Dieppe and Councillors at a Civic Reception and Dieppe to celebrate the links between Dieppe and Newhaven.

The next day the bike ride started in earnest and the team cycled 74 miles to Beauvais. The following day saw the team complete the final 52 miles, entering Paris in the afternoon of Sunday the 8th May.  They were met by the Mayor of Brighton who travelled over to France to congratulate the team at the finish line at the Eiffel Tower.

Combined with the sponsorship of the event from Oakley, Chris Oakley managed to raise over £15,000 of sponsorship.  Chris commented ‘I really wish to thank all those friends, clients and colleagues who have been so supportive of this event, it’s an amazing total to have raised’.

The donations will all go direct to the Brighton Mayor's, Linda Hyde, charities which comprise The Argus Appeal, Grace Eyre Foundation and Martlets Hospice. The event took place in the Mayor’s final week of office and she has now raised more for charity than any other Brighton Mayor.

Chris Oakley commented 'This was a fantastic event and I am really proud to have taken part and raise so much money for good causes. The property profession does very well out of Brighton & Hove and it is great to be able to give back to our local community. The ride has been such a success, that we are now planning next year's event through the property consortium and hopefully we can encourage other property professionals to join us for what has been a great fun event. That said I now need a hot bath and a lie down!'

The Brighton & Hove Property Consortium has been supported by local property companies to include Colin Brace Property, Hyde, Lewis & Co, RLF and Handlesbanken.