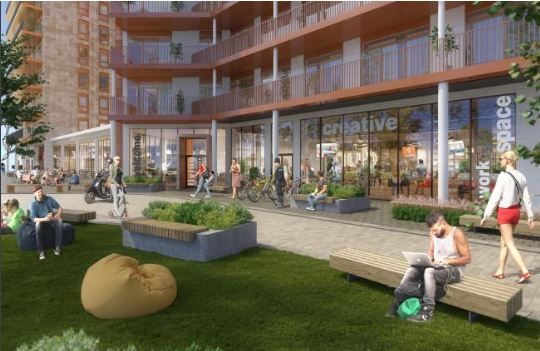 SUSSEX’S ugliest building could make way for business space for up to 280 entrepreneurs in new plans revealed exclusively in The Argus.

Developers First Base has unveiled further proposals to create co-working spaces for start-ups on the site where Anston House currently stands in Brighton.

The ground-floor workspace would be below 229 homes also proposed for the site in a series of towers around 12 storeys high.

It is estimated that the regeneration of the site will bring in an additional £6 million to the city in local spend from new residents and businesses.

The nine-storey eyesore Anston House in Preston Road has been derelict since 1988 and was overwhelmingly voted the county’s worst building in a poll of The Argus readers in 2004.

First Base is the latest firm to try and breathe new life into the site which has been subject to 60 planning applications in recent years.

The group said it has carried out a huge amount of public consultation - including writing to 3,000 residents - during the development of the plans which included a resounding public poll in favour of demolishing the existing 1960s high-rise.

It is hoped that a planning application will be submitted next month with the hope work could begin next year on what is expected to be a two to two-and-a-half year build.

Initially it had been estimated a planning application could be submitted by February but developers have said they have taken more time to develop the co-working space.

Developers said the new office was designed to meet a growing demand in the city for a new way of working away from the traditional office environment.

Backers of the scheme have said they hope to build on the success of co-work spaces across Brighton and Hove including The Werks, The Skiff, The Fusebox, Rodhus and Entrepreneurial Spark further down Preston Road.

It is also hoped that a café based in the workspace will help to increase footfall around the new development while architects propose siting the building closer to Preston Road than Anston House.

Developers have said they have aimed to create an “iconic” and “visually beautiful” building to match the location close to Preston Park and on one of the busiest routes into the city.

Eeva Paasiaro, development manager for First Base, said: “The redevelopment of Anston House provides an opportunity to address the demand for homes and modern workspace in Brighton.

"Our proposals will deliver 229 new homes and workspace for over 280 local maturing start-ups and provide a real boost to the Brighton economy."