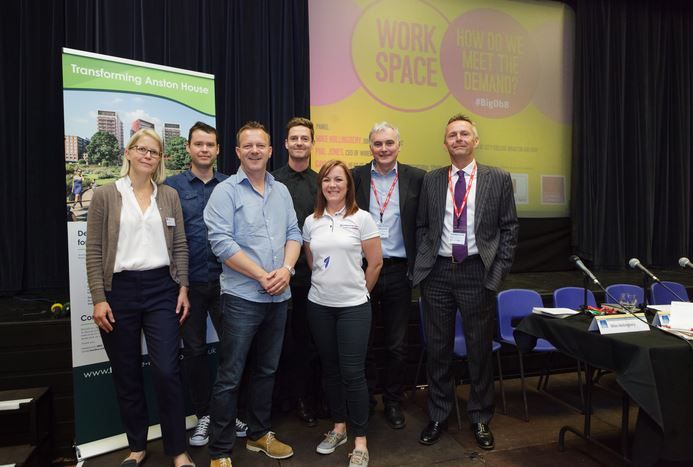 It is a much pondered question in Brighton and Hove, and a topic that has arisen in many conversations over the past few years, as the city's existing office space and potential for development is far exceeded by its desirable location.

This is a city where people want to be, and for a long time demand has outweighed supply, pushing the cost of housing up by 10% over the past year. As a result of the focus on housing - the city’s assessed need is 30,120 houses by 2030 - further pressure has been put on the creation, and indeed retention, of good quality workspace.

Over one hundred Brighton business leaders and influential figures, including the mayor and several members of the council planning committee, gathered at City College on Wednesday 6th July to debate the issue of workspace in the city.

The evening was sponsored by First Base, who are in the process of transforming the long-since derelict Anston House, known as Brighton’s ‘ugliest building’, into a beautiful co-working space with additional housing.

With input from Hyde Housing and designed by Conran and Partners architects, the plans aim to transform the site, offering 229 homes while facilitating job growth within the local economy.

The debate, chaired by City College’s chief executive, Nick Juba took place against the backdrop of the City Plan, a strategic and spatial vision for Brighton and Hove drawn up by the City Council.

Part 1 of the plan was adopted at Full Council on 24th March this year and gives a broad overview, while City Plan Part 2 will involve a more detailed allocation of sites and land use, pertinent for the future development of Brighton businesses.

Gayle Mann at Entrepreneurial Spark, the UK’s largest business accelerator, spoke about the importance of providing affordable workspace for startups. She said:

"The energy, commitment and enthusiasm that the community have for living and working in Brighton and Hove is evident, but with that brings a huge challenge to accommodate this both in terms of the property available, developer needs and wants and restrictions around planning, as well as the desire to be located within a very small geographical boundary.

“The Big Debate was an excellent step towards bringing these issues to a public forum – the test will now be for everyone involved to think creatively and entrepreneurially to solve this and – dare I say – to think outside Brighton."

Several members of the audience agreed, suggesting a move outside of the city centre could expand Brighton and Hove’s entrepreneurial hub and give the city a more competitive edge. In order for this to be successful, however, the council must focus on improving transportation links around the city.

Phil Jones, chief executive of Wired Sussex, the membership and support organisation for the digital sector, said that while the digital sector is expanding rapidly, available workspace is actually decreasing.

Demand for space is biggest among companies with a turnover of between £1 million and £3 million, but options are limited and space is expensive - often the added pressure of a long lease and 12 months down-payment also stands in the way of business development.

While disused factories are turned into housing in the North with few issues, here, Phil said, it is “the road to hell, paved with good intentions.”

Too many property developers come to the city from elsewhere with plans that don’t fit the needs of Brighton businesses, particularly in the digital sector. Short-term leases are particularly important for some digital start-ups, but they are few and far between. Instead, Phil said, developers come here only with “pound signs in their eyes.”

Property agent Chris Oakley said the issue was largely due to a sense of space and place, and in order to resolve this issue, the council must think more creatively. He said:

“There is clearly a big issue hanging over the City, which is how do we creatively plan to accommodate the expansion of our wide variety of creative businesses that want to work in the Brighton and Hove region?”

During the breakout sessions, members of the audience suggested shared amenities, more focus on co-working spaces and flexible working  – not just for freelancers but for small businesses in general

– and a bigger push from the council to retain office space, rather than allow it to be converted into housing.

Steve Pette, Found of Hearts and Minds, believes coworking is a key part of the solution. The way people work has changed, he said, and space needs to change to reflect this.

“With just a laptop and a mobile phone, you can start a global business. You can do more with less.”

“Brighton’s success lies in its ability to enable the SME business community, harnessing the power of the digital businesses and creating environments where they can thrive and connect. That means creating professional inspired workspace that reflect the future of work, where serendipity and opportunity coexist for the good of all”.

Mike Hollingbery, founder of digital agency Bozboz, spoke of the importance of Freehold properties in the city, which take the pressure of high rents and inconsistent lease-lengths off business owners and provide an opportunity to develop properties in-line with the character of the business.

For Mike, having a building that reflects the creative nature of Bozboz was key when looking for a place in which the company could expand. The issue in Brighton is the lack of Freehold properties of any kind, coupled with the underhand approach some developers and some estate agents take to selling those that are available.

Mike said he had inadvertently become a property developer during the business’ four relocations. He concluded:

"It is clear to me that for Brighton's economy to grow and prosper, more high grade commercial property is needed urgently. The lack of space is a barrier to growth for Bozboz and many other Brighton businesses, and in turn is impacting our economy as a whole"

Speaking from the audience, micro-business ambassador and former council leader, Jason Kitcat turned attention back to the development industry in the city. Many vacated offices are turned into flats because property owners can double their money by selling homes rather than letting office space.

He said more impetus must be put on the council to prevent this from happening.

Businesses can find themselves in a catch 22 situation - their Brighton location is a real selling point for local talent, yet there is only so far they can grow with the office spaces available.

“Is there a risk that in the legitimate drive to generate more housing we overlook the essential role that workspace has in driving economic growth and development? After all, people need somewhere to work, right?” Nick Juba asked in his introductory address.

“I suppose the point I am trying to make is that the issues – and therefore probably the solutions – facing workspace in the city are integrated and complex.”

Thank you to Sophie Turton from Bozboz for writing this blog for our website. Get in touch with her at sophie@bozboz.co.uk or visit https://www.bozboz.co.uk/.