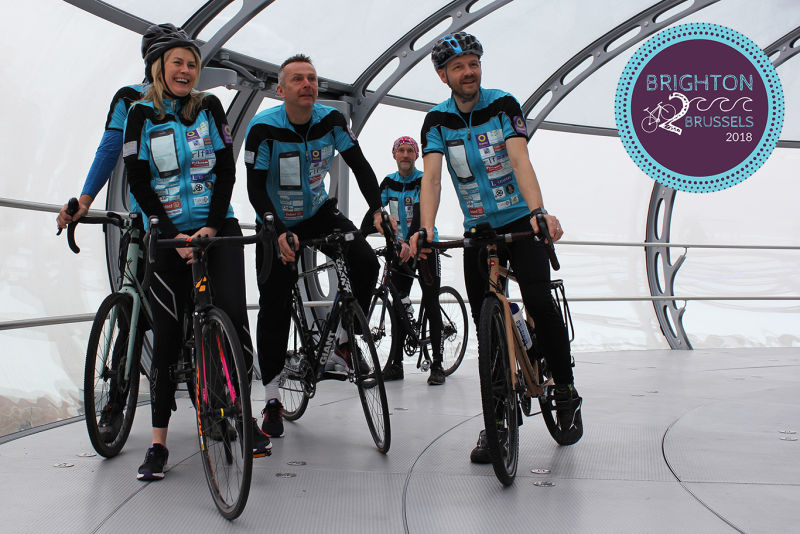 Cyclists taking part in the Brighton2Brussels Oakley Property and Hyde Group sponsored Charity Cycle Ride in aid of the Mayor’s Charities will attempt a new world record by cycling the first mile of their journey in the sky.

This year’s charity bike ride will start at The British Airways i360 on May 3, with the 40 riders cycling a mile around the inside of the pod as it glides up to 450ft and back again. The participants will then continue their ride on to Brussels, and the bike ride is the official launch event the Brighton Fringe Festival.

Several cyclists from the Brighton and Hove Property Consortium (BAHPC) who are taking part in this year’s ride tested the pod cycle on Monday February 19.

British Airways i360 was conceived and designed by Marks Barfield Architects, creators of the London Eye. Executive director Steve Bax said: “The test ride went brilliantly and we’re all excited about welcoming the full team of cyclists onto the British Airways i360 pod on May 3 and to seeing them off to Brussels in style!”

BAHPC founder and cycle ride organiser Colin Brace is hoping the mile in the sky will set a new record with Guinness World Records or a similar organisation.

He said: “I am thrilled that we have developed such a close working relationship with British Airways i360 and we are very grateful for their support.  This will be the first stage of our four-day cycling event and our aim is to raise over £50,000 to help support the most vulnerable residents of our city. There’s still time to sponsor us, or even to sign up, saddle up and join in!”

Chris Oakley of Oakley Property took part in the record test ride and commented after the ride “ Well that was a weird experience!  We measured out that to cycle a mile meant 40 laps of the i360 pod, it makes you very dizzy and it will be great fun when its 40 of us actually riding around what will then be a cramped pod, rather than just the five of us who trialed it, bring on the record attempt!”

About the Brighton & Hove Property Consortium

The Brighton & Hove Property Consortium (BAHPC) is a not for profit organisation formed of property professionals who work throughout the city and devote their time and resources to improving the fabric of the city.  We are a business-led, issue-focused organisation which enables our members to promote their businesses collectively whilst enabling them to deliver their corporate social responsibility.  We do this by fundraising for the Mayor’s Charities, providing the opportunity for the local property industry to give something back to the city by supporting local causes.

The Mayor’s Charities are nominated by the incumbent Mayor which this year include the Martlets Hospice, Albion in the Community, RISE, Sussex Heart Charity and The Clock Tower Sanctuary. Find out more on Twitter: @bandhpropco