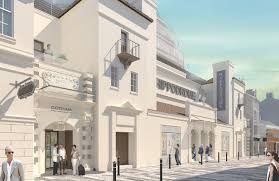 We were excited to hear on the grapevine about the new vision for the planned redevelopment of the iconic and beloved Brighton Hippodrome building in The Lanes to bring back to life this “cultural mainstay for the city”.  The building used to host variety shows and the circus in its height of popularity and was originally an ice rink when it was built in 1897. It has sadly sat derelict for several years, at what could be considered the “end” of The Lanes reaching to the seafront.

The Grade II*-listed building has been left unused for more than a decade and has even topped the Theatres Trust’s list of most endangered venues for many years now. Theatres Trust director, Jon Morgan, described the Hippodrome as being the “UK’s most architecturally significant circus theatre – the finest surviving example of its type in the country”. Morgan added that Brighton cannot at the present time produce large-scale theatre, but that the revamp plans have potential to make the Hippodrome once again an “exciting addition to Brighton’s already vibrant cultural scene” So, what will the Hippodrome become 122 years on from its original beginnings?

A piece of theatre past, present, and future

Hipp is working with Brighton Dome and the Brighton Festival to look at the “renovation, restoration and future management of the theatre”. Theatre development specialist group ARUP has been appointed to supervise the project and ensure that appropriate choices are made for the site which is part of British theatrical history. This news, therefore, is of great importance to Brighton’s cultural heart and to the history and future of British theatre too. As Mr. Sheikh of Hipp Investments said, “we now have a unique opportunity of putting Brighton back on the map for theatre”. Mr. Sheikh has always had a strong interest in keeping the Hippodrome as a theatre, a viability study has shown the tremendous future potential of the theatre as a performance venue, so the restoration cost of anywhere between £13 and £30 million is an investment into the city’s cultural future.

Restoration and Redevelopment of Middle Street and Dukes Lane

Hipp Investments, a specially formed group that now owns the building has said that once planning permission is granted work will start on the restoration of the original theatre façade and dome, with a steel structure to be put in place to support the crumbling 19th-century building. Development plans created by LCE Architects will see the Hippodrome “lighting up Middle Street” with a new Crush Bar to be situated between the two towers like that at the St. James Theatre in Victoria. The derelict land that currently surrounds the Hippodrome is also planned to be incorporated into the redevelopment, creating a 74-room boutique hotel and luxury spa along with 26 contemporary private apartments.  The plans would give the whole area a facelift that will bring prosperity to the Old Town conservation area that the Hippodrome sits within.

The longer-term aims will hopefully see the area develop its own style of Brighton vibrancy whilst retaining it Old Town character as developers hope to collaborate with neighboring Dukes Lane shopping street to open the space in-between as a pedestrian thoroughfare with plans for new retail units, and outdoor eating and drinking spaces. We look forward to seeing work commence on this historic building and the regeneration that it will bring to the city of Brighton & Hove and await with interest to see the new Commercial Lettings opportunities that will arise for businesses.