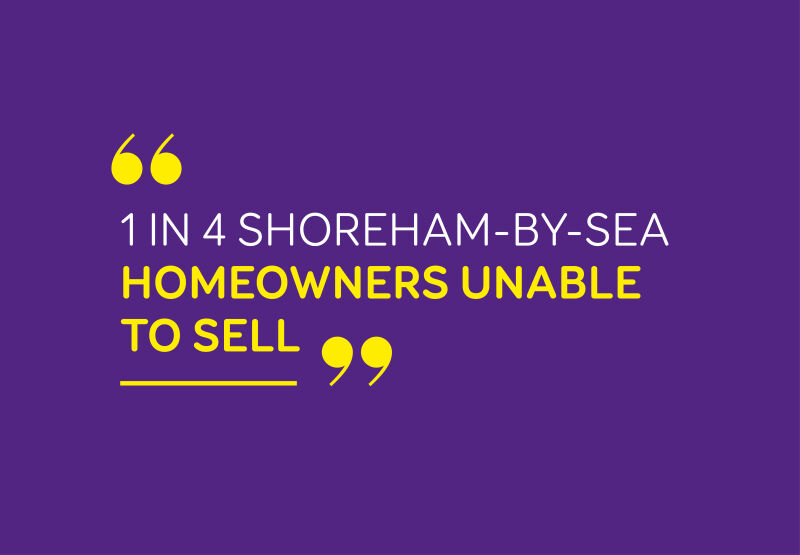 You would have needed to have been living in a cave since the end of Lockdown No.1, not to realise the property market has been on fire in Shoreham-by-Sea (and the UK as a whole) for the last 18/20 months.

It has been very much a seller’s market, especially in 2021. Yet as we enter the second quarter of 2022, we have noticed a slight rebalancing of the Shoreham-by-Sea property market, more towards buyers, something that is good news for everyone (sellers and buyers) locally.

In 2020, it took on average 66 days from the average Shoreham-by-Sea property appearing on the property portals (i.e. Rightmove, Zoopla etc) to the property going sold (STC).

Interesting when compared to the national average of 72 days in 2020. Yet, last year, this was reduced to 49 days in Shoreham-by-Sea (51 days nationally).

So, what's the issue with the Shoreham-by-Sea property market being on fire?

Well, that was last year, and things have changed slightly since.

Of the properties for sale in Shoreham-by-Sea, 24.7% of houses have been on the market for more than 12 weeks.

That doesn't sound a lot, yet that is an eternity in this market!

So, why are there so many properties on the market in Shoreham-by-Sea still for sale after all this time … it usually comes down to one thing … the practice of 'overvaluing'.

So before we explain what overvaluing is, let us give you some background.

Many agents (not just ourselves), in 2021, were achieving top prices for Shoreham-by-Sea property with multiple offers becoming the standard. The property they were selling was only available to buy for days before the owner obtained multiple offers that were not only at a satisfactory level, yet more than they ever dreamed likely.

Although this was great news for Shoreham-by-Sea homeowners, this caused fewer homes to come onto the market in the last six months in Shoreham-by-Sea, as people were afraid to put their home on the market without having a property to buy.

While ‘overvaluing’ is nothing new, the custom has been generally limited to a small number of estate agents. Yet now, it's become more prevalent and creates uncountable distress and pressure for some Shoreham-by-Sea homeowners.

Many Shoreham-by-Sea homeowners want to sell quickly to get the property of their dreams. Yet, in many cases, when they do put their property on to the market, they don’t sell quickly enough because of this ‘overvaluing’ (even with the fantastic current property market conditions).

To give you an idea of the issue…

72% of Shoreham-by-Sea homes put on the market in the last 30 days have not sold.

There are hundreds of Shoreham-by-Sea families having their dreams dashed by 'overvaluing.'

Therefore, let's look at exactly what overvaluing is, why it’s on the rise and most importantly, the harm overvaluing causes to homeowners like yourself.

You would think the most important thing in estate agency is all about finding the best buyer for your home, at the best price, who can make the move with the least amount of hassle.

To us it is, and to many other Shoreham-by-Sea estate agents, it is as well. Yet, to some agents, sales aren’t the essential objective. Instead, it is having a vigorous catalogue of properties to sell to generate more future leads.

Deprived of an endless number of new properties for sale, the enquiries estate agents receive will significantly drop, leaving them high and dry without any buyer (or seller) leads, the lifeblood of estate agents.

Therefore, some (not all), but some estate agents will feed on a homeowner’s appetite to get the highest possible price for their Shoreham-by-Sea home by giving them an over-inflated suggested asking price to market their property at (i.e. ‘overvaluing’).

If one estate agent can get you an extra £30,000 for your Shoreham-by-Sea home, you will take it, won’t you?

The suggestion of pushing the asking price of your Shoreham-by-Sea home for 10%, 15% even 20% could be seen by many as a temptation too good to miss. Yet once you are on the market, the agent is trained to slowly get you to reduce your asking price over a lengthy sole agency agreement.

The problem is that the home of your dreams might have sold by the time you reduced your price in 3 months. Also, Which reports in 2017 and 2019 proved you ended up getting less for your home when it did eventually sell (which means you lose money) and finally, the agents know homeowners perceive it’s a hassle to swap agents (which it isn’t).

But estate agents only get paid when they sell the house; why do they overvalue?

Would it surprise you that some Estate Agency chains pay their staff a commission when they put the property on to the market, not when it sells? So, their team over inflate their suggested asking prices to get that commission.

With 72% of Shoreham-by-Sea homes still for sale after a month, the market is starting to level out and if you are keen to sell, then let us give you some advice.

Research has shown that if the asking price is initially set too high, it will be ignored by people surfing Rightmove and Zoopla.

When the property is eventually reduced because it has the stigma of being on the property market too long (begging the question of potential buyers that there may be a problem with the property itself, hence no interest), often when it does eventually sell, it will sell for less than what it would have done if it were priced correctly from day one (as per the two reports from Which in 2017 and 2019).

Of course, on the other hand, setting the asking price below its market value means potentially leaving money on the table needlessly – hence the need for a good agent.

Putting your Shoreham-by-Sea home or buy-to-let investment up for sale at the right price from the beginning is the key to selling within the best time frame and for the best price to a serious and motivated buyer.

Ask a handful of estate agents to value your home, ask them to back up any valuation of your Shoreham-by-Sea home with cold hard comparables of similar properties to yours.

If you only take away one thing from this article, when you search the portals for comparables, make sure you include under offer/sold STC properties, as that will triple the comparable evidence.

Thus, by doing your homework and then working with a dependable, trustworthy and experienced Shoreham-by-Sea estate agent, who will help to ensure that your Shoreham-by-Sea property is put on the market to get you, the homeowner, the best price from day one without over cooking it (so you don’t lose out), you will be just fine.