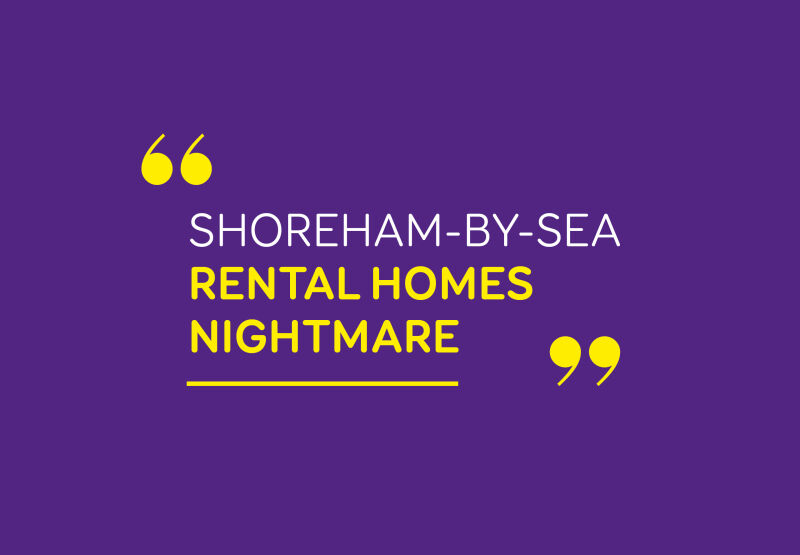 There has been a rise in demand for rental properties and an 8.9% fall in the number of Shoreham-by-Sea private rented properties, which has caused rents to rise by 5.9% in the last year, a new all-time high.

The National Residential Landlords Association asked the respected economics think tank Capital Economics, to carry out research on the UK rental market. It found that if the current trends in the property market in terms of growth of the population, Brits living longer, the lack of new homes building, the reduction in social housing (aka council housing), then demand for homes in the private rented sector needs to increase by 227,000 homes per year.

So, based on those numbers, Shoreham-by-Sea needs to have an additional 199 private rented properties per year.

So, why has supply of private rented homes in Shoreham-by-Sea reduced?

Section 24 was introduced in 2017 to level the playing field on the taxation of property between homeowners and landlords. Section 24 stops landlords from offsetting their buy-to-let mortgage costs against the profits from their rental property. Interestingly, no other kind of UK business is affected by the Section 24 taxation. In other words, whatever other form of business you might be in, be it butcher, baker or candlestick maker, every other business can offset their finance costs against their profits, except buy-to-let.

When someone buys a property, they normally must pay a tax to the Government for the privilege. This tax is called Stamp Duty. Yet landlords must pay an additional 3% stamp duty supplement on top of that when they purchase a Shoreham buy-to-let property. Evidence suggests some of these landlords have decided to hold off or scale back buying additional buy-to-let properties for their portfolio because of the thousands of extra pounds that landlords have to pay to buy the rental property.

With more than 150 pieces of legalisation, and new laws being added each year, the burden on landlords is huge. On the horizon is the Renters Reform Bill which will remove the no fault evictions. Also, all rental properties with an Energy Performance Certificate (EPC) rating of below a ‘C’ will have to be improved (i.e., money spent on them) by the landlord. This could be more than £10,000 per property. Hence, why some Shoreham-by-Sea landlords have been selling their rental properties with low EPC ratings in the last 18 months.

There are some Shoreham-by-Sea landlords who are classed as ‘Accidental Landlords’. In 2008/9, with a slowing property market and house price values dropping in the order of 16% to 19% (depending on the type of property) some Shoreham-by-Sea homeowners decided to let their home out as opposed to selling it at a loss. Yet, with the price booms of the last 18 months, many decided to cash in on the higher property prices and sell - again taking another private rental property out of the system.

So, why is demand of private rented homes in Shoreham-by-Sea increasing, even though more people own their home than 5 years ago?

Even with better provision of affordable social housing and higher rates of owner occupation in Shoreham-by-Sea (rising from 71.56% of homes being owner occupied in 2017 to 74.19% in 2021), demand for private rental property continues to outstrip supply.

There are many reasons behind this including:

1.People are living longer, meaning not so many properties are coming back into the mix to be recycled for the younger generation.

2. Net migration to the UK has continued at just over a quarter of a million people a year since 2017, meaning we need an additional 115,000 households to house them alone.

3. For the last two years, one in six of the owners of properties that have been sold have moved into rented accommodation instead of buying on because of the lack of properties to buy.

So, what is the outcome of the imbalance between supply and demand on Shoreham-by-Sea rental properties?

The severe shortage of housing in the private rented sector is pushing up rents as demand continues to grow. Many Shoreham-by-Sea people are finding it hard work to find appropriate accommodation at a reasonable rent, and with mounting numbers of tenants predicted to continue, this situation will only get worse unless more houses are built.

Yet, these higher rents are now enticing new landlords back into the Shoreham-by-Sea buy-to-let market because of the higher returns.

With higher inflation, property investment has been seen in the past a safe harbour to invest one’s money in. With the bonus of rising yields (because of the increase in rents) together with the nervousness of the Bank of England to increase interest rates too much because of the issues in Eastern Europe, this could be the start of a second renaissance in the Shoreham-by-Sea buy-to-let market.

If you have concerns about the issues in legislation and taxation, then the advantage of employing a letting agent, with the choice of property, what you pay for it and how it’s managed, will go a long way to mitigate them.

If you are considering getting into the Shoreham-by-Sea buy-to-let market for the first time or expanding your property portfolio (whether you are a client of ours or not) please do not hesitate to give us a call.